The solar plexus chakra is the third of the seven main chakras, located around the belly button in the stomach area. It represents confidence, self-esteem, and personal power.

OUTLINE OF THE Solar Plexus CHAKRA 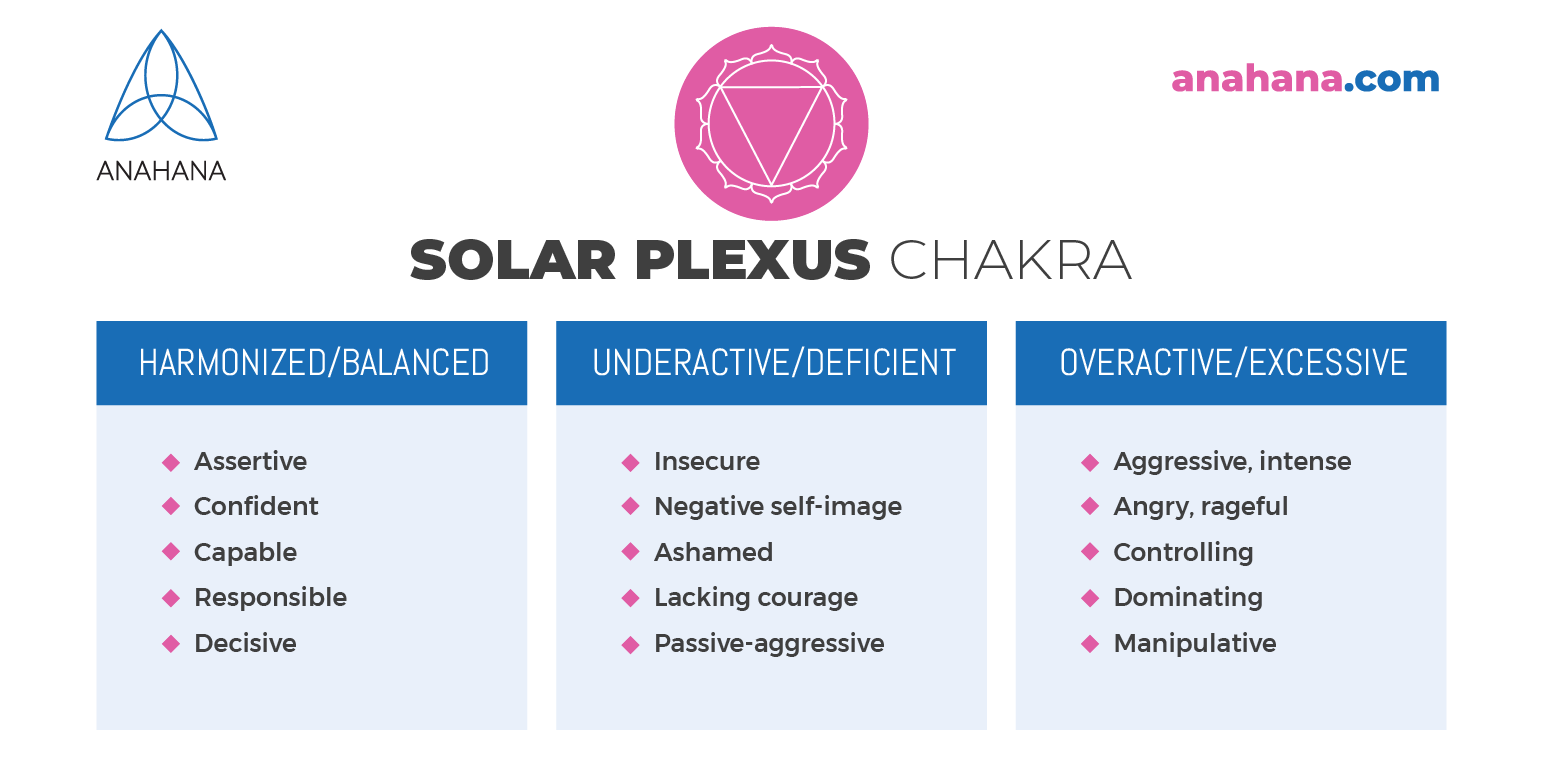 Origins of the Solar Plexus Chakra

The Chakra system originated in India between 1500 and 500 BCE. It was first mentioned in the ancient text called the Vedas, which introduces the seven primary chakras.

Chakra is defined as a spinning wheel of energy that runs up the spine to the top of the head. Concepts of the seven chakras came to the Western world in the 1880s from tantric yoga traditions and are increasingly studied and practiced due to the extensive benefits.

Functions of the Solar Plexus Chakra

As the third chakra, the solar plexus chakra governs self-confidence, relating to self-esteem, purpose, and inherent power. Kundalini energy lies dormant at the base of the spine until it is awakened through wellness practices including chakra meditation, asanas, pranayama and prayer. When energy flows through the third chakra, individuals may experience heightened skillful self-expression and increased confidence in themselves. This helps people feel motivated and have a deeper understanding of their purpose in life.

Blocked chakra energy can negatively impact health in the physical body and mental state. Some of the symptoms may include:

Other symptoms of the physical imbalance include blood pressure issues, diabetes, eating disorders, and stress-related illnesses. Additionally, one may experience improper processing, control issues, be overly rigid, and inhibit a victim mentality.

Those experiencing any of these symptoms may benefit from practicing some of our recommended solar plexus chakra healing exercises so life force energy can flow freely through the human body.

How to Open the Solar Plexus Chakra

Several practices support the opening and balancing of the solar plexus chakra. Here are some exercises that bring balance to and heal the third chakra:

Burning Incense and Oils: Aromatherapy is proven effective in opening and healing the chakra energy system. Musk, sandalwood, ginger, saffron, and cinnamon are incense and oils that correspond with the solar plexus.

Repeating Affirmations: Repeating affirmations aloud, in writing, or in one’s head supports positive thought patterns. Some examples of positive affirmations that support the health of one’s sacral chakra include:

Why does my solar plexus chakra hurt?

Although there are several reasons one’s solar plexus chakra may feel pain, the most common cause is anxiety. The third chakra is closely tied to the lungs and adrenal glands. Because of this, added stress that causes shortness of breath may affect the solar plexus chakra. Try performing breathing exercises to reduce anxiety and feel calm.

Other reasons one’s solar plexus chakra may hurt include:

There are several ways one can heal the pain in their manipura chakra. Resting and allowing the body time to heal is often an effective method. During this time, apply heat to the solar plexus area or cold packs if there is swelling. Additional methods include:

Several techniques can prevent blocked energy from occurring in the solar plexus chakra. Some of these include:

In addition to allowing energy to flow freely through the solar plexus chakra, these methods may help you live a healthier lifestyle.

Root Chakra Stones: These 11 Crystals Are Crucial For Healing

Everything You Need to Know About the Root Chakra

Some people believe that a Kundalini awakening is remarkably powerful spiritual experience that can cause significant changes in consciousness and...

Yoga can be helpful for some types of knee pain. However, prior to trying to use yoga to deal with your knee pain, it can help to understand how the...

Getting started with yoga can be both exciting and intimidating. The sheer number of poses, new words, and unfamiliar terminology is confusing for...