For centuries, Tibetan Buddhists have practiced tantric meditation known as tummo meditation or breathing. It is also known as psychic heat or inner fire, as it creates internal heat within the spine. This style of meditation is unlike most. Generally, meditation generates a sense of calm and tranquility by lowering the heart rate and blood pressure to allow inner peace. Tummo meditation does the opposite. It uses the sympathetic nervous system (SNS) to increase the heart rate and core body temperature while igniting the mind by enhancing cognitive function and capacity. 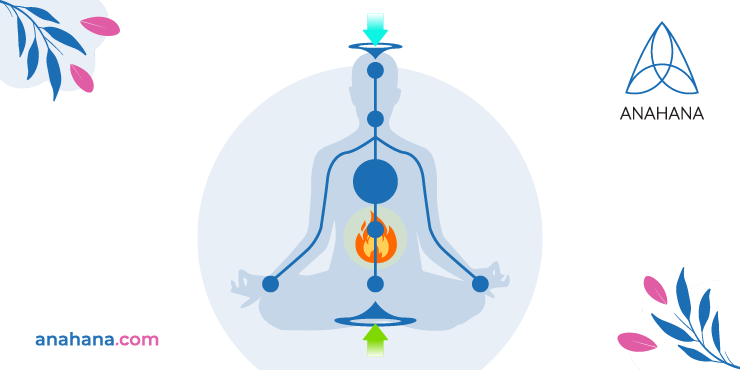 Vajrayana refers to Buddhist traditions associated with tantra. One of the primary traditions is Tummo meditation. Tummo is a Tibetan word that means inner fire. During the ancient meditation technique, Tibetan Buddhists perform meditative breathing and visualization techniques to produce internal heat.

Herbert Benson, an American medical doctor, and founder of Mind/Body Medical Institute, extensively studied and observed the ancient meditation technique practiced by Tibetan Monks. He watched the Buddhists wrap wet towels around each other while in a cold room. When deep in the tummo meditation, steam would begin rising from the bodies of the Monks. The tummo meditation elevated body temperature and kept the body warm so they could withstand frigid conditions. By the end of the practice, their warmth would dry the towels. Benson observed that none of the men shivered or appeared uncomfortable during the meditation.

Benson and his colleague, Sara Lazar, studied the Buddhists using rectal temperatures and functional magnetic resonance imaging (fMRI). They did this to observe and measure the changes in the Tibetan Buddhists' core temperature and brain activity while performing tummo meditation. The findings revealed that the peripheral body temperature increases due to decreased blood flow to highly active brain regions and increased peripheral blood flow.

The observations seen by Benson led to his hypothesis that meditation and the study of meditation could create a new capacity for the treatment of stress-related illnesses. He developed the relaxation response from these findings, which he explains will trigger physiological mechanisms that oppose stress.

What Is The Inner Fire? 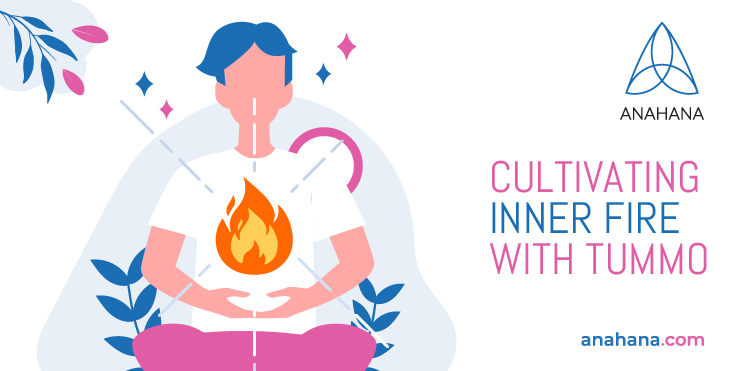 The inner heat during Tummo meditation occurs by visualizing flames at specific places on and within the body. Accompanied with meditative visualization are feelings of warmth radiating from the spine. The inner fire sustains the elevated core body temperature, increasing the body temperature for extended periods.

Monks can raise their peripheral body temperature (finger and toe temperatures) by more than 11.7°C, while more modest skin temperature increases by close to 1.9°C in the navel and lumbar regions. There was no increase in rectal temperature or anything that caused the normal body temperature to rise. However, findings indicate that two factors affect the rise in body temperature. During the mindfulness meditation, the intense concentration and mental imagery generate sufficient heat to keep the body warm.

Mindfulness meditation practices focus on the mind by acknowledging distractions in the environment, mind, and body without allowing an affective reaction (emotional or emotion-driven). The lack of an effective response removes the attachment to external stimuli. Instead, it enables individuals to focus on one specific object, thought, or mantra.

How Can We Control Our Normal Body Temperature?

The Tibetan monks who practice Tummo meditation and breathing use a combination of gentle and forceful breaths to redirect their attention internally. Kozhevnikov and colleagues conducted functional magnetic resonance imaging (fMRI) studies on Buddhist monks. They observed that the fierce breath used during meditation increases the heat radiating from the spine after the gentle breath creates and maintains the inner heat (2013).

Kozhevnikov hypothesized that the inner heat is achievable through the inward shift of attention and focus, thus ignoring external stimuli and distractions. This change in engagement was observed through electroencephalogram (EEG) data, which measures electrical activity within the brain using electrodes placed on the scalp. The electrical activity indicates brain activity and cellular communication during meditative visualization. This data is used in neuroscience to understand how the human brain functions and communicates with the body. The use of EEG in Kozhevnikov’s study provides an essential understanding of how brain activity changes during meditation.

The changes on the EEG were observed to occur at the same time as the monks held their breath. This observation led to Kozhenikov’s understanding that inward attentional focus and breathing exercises create the inner heat and allow the monks to increase their average body temperature regardless of environmental temperature.

Controlling our body temperature is not an exact science and is impossible for everyone. Buddhist monks have practiced Tummo meditation for decades and are masters at breathing and isometric techniques. Their abilities are unmatched by other meditators; therefore, it is unlikely that the average person undertaking the practice of Tummo will be able to change their body temperature significantly.

How Is Tummo Breathing Similar To Buteyko Breathing? 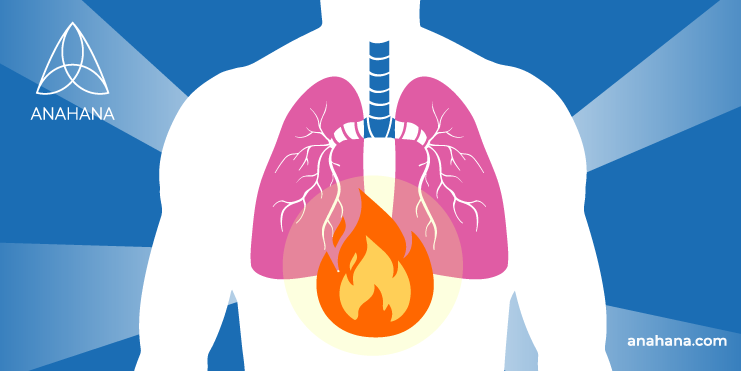 Buteyko breathing decreases respiration rate, slows the mind and body, increases parasympathetic control, and decreases sympathetic control. During Buteyko, one is quiet and introspective, focusing on the breath and ignoring all distractions. This method is excellent for asthmatics, individuals with hypertension, and those who wish to learn about nasal breathing. Alternate nostril breathing is one of the many breathing exercises taught in Buteyko breathing.

Tummo meditation requires an increase in the breath. This method could be dangerous for those with asthma or hypertension as it drives up the sympathetic response. This plates on the fight or flight response and focuses all thoughts on building an inner fire. Tummo meditation increases cognitive capacity, heart rate, and core body temperature, making it an excellent practice for athletes.

The increase in sympathetic control and adrenaline may provide performance benefits for athletes. A pre-game routine where Tummo meditation is included can increase the mental preparedness of the athlete while improving circulation. There is no scientific basis for implementing Tummo meditation for athletes, but the observations of Iceman Wim Hof show the enhanced capabilities of those who practice this breathing method. 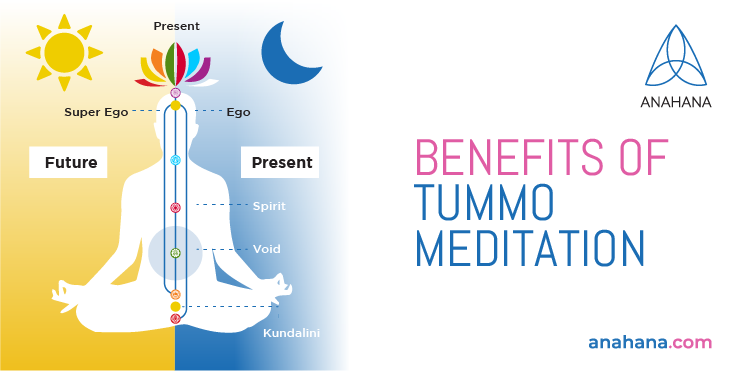 Tummo meditation has extensive health benefits. Here are four of the many improvements to reap through the meditative visualization practice:

2. Stress management: Like most breathing exercises, tummo meditation can help with stress management and improve anxiousness. Focusing on the breath is an effective way to engage with the present moment when feeling overwhelmed.

3. Transformation: This meditative visualization and breathing technique can awaken internal power, activate feelings of bliss, improve the ego, and send kundalini energy up the spine, increasing confidence and boosting creativity.

4. Chakra activation: Awakening the chakras aids in aspects of the body and mind's overall health and well-being, considered one of the most extensive benefits and occurs through activating the inner fire. 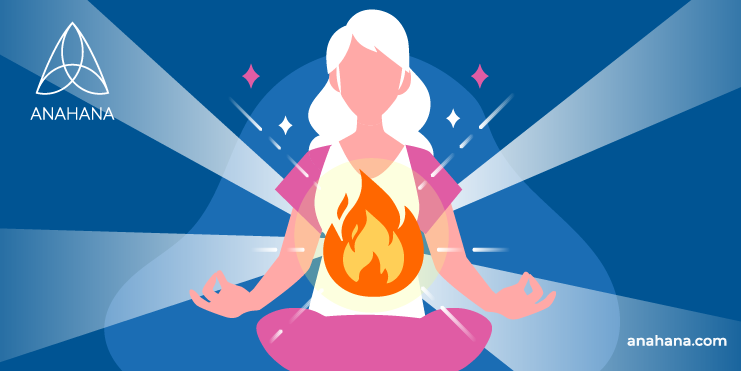 There are three main steps to practicing tummo meditation. Step one involves the visualization of a fire burning within the core, step two includes deep quick breaths into the chest, and the final step utilizes a vase breathing belly hold.

Get comfortable in a seated position placing the hands on the abdomen area. Begin breathing in and out and focus on the belly. Imagine the body is a hollow balloon, and there is a fire burning within the core. This fire is the main focus of Tummo.

Once you have visualized a fire burning within the belly, begin to take faster breaths. Inhale through the nose and exhale through the mouth with rounded lips. Imagine fanning the flames with each breath, watching them grow larger and hotter. On each inhale, lean backward, gathering all the air into the chest. Then lean forwards as you exhale through the mouth—complete five consecutive breath cycles. On the fifth inhale, move to step three.

On the fifth inhale, hold your breath and swallow. This will move the air into the belly, fanning the flames and making the fire grow hotter. Tighten the lower belly muscles (tighten the sphincter muscles used to prevent urination) at the same time as you swallow that fifth inhale. Hold this breath in the belly until feeling as though you are starved for oxygen. Exhale slowly through the mouth. Repeat steps two and three.

Tummo meditation initiates your sympathetic nervous system, also known as the fight or flight response. It connects to the neurotransmitter adrenaline and noradrenaline, which signal to the brain about a dangerous situation so the body can prepare to defend itself. The body responds by priming itself for activity. It increases the heart rate, respiration rate, blood flow, and cognitive functioning. Neurocognitive and Somatic Components of temperature rise during tummo meditation, raising body temperature to withstand the frigid environment.

The release of adrenaline in the blood can be harmful to individuals with psychiatric disorders. The increase in adrenaline and stimulus of the fight or flight response can increase psychiatric issues as it initiates the trauma response. Tummo should only be performed by individuals of sound mind and body, with initial teachings and practice completed under the guidance of a trained professional.

What Is Tummo Meditation?

Tummo meditation is a tantric meditation visualization where one visualizes an inner fire. Following this, one will partake in vase breathing techniques that incorporate forceful breath. Vase breathing has practitioners contract their abdominal and pelvic muscles so that the protruding lower belly takes a vase or pot shape. It initiates the sympathetic nervous system, increasing the heart rate, blood pressure, and cognitive capacity. If a person has any health concerns, it’s a must to speak with a physician before completing vase breathing.

Tummo meditation can increase the respiration rate and blood pressure to dangerous levels for individuals with underlying health conditions relating to their heart or respiratory systems. It can also be hazardous for individuals with psychiatric disorders, including anxiety, because it triggers the fight or flight response. If you have any concerns, speak with your doctor first before practicing this breathing technique.

How Long Does Tummo Meditation Take?

Generally, a twenty-minute session per day is all that is required to focus on the inner fire, create internal focus and connect the brain to a deeper level of consciousness. With just twenty minutes per day, one can see the physiological changes and health benefits of Tummo.

What are the Benefits of Tummo?

How Does The Wim Hof Method Differ From Tummo Meditation?

Both exercises incorporate deep breaths, cold environments, and meditation to create inner heat. However, there are some distinct differences.

Tummo meditation derives from Tibetan Buddhism. It consists of breathing and visualization techniques that help to enter a deep state of meditation where a person's inner heat will increase. Its unique breathing techniques enable one to control their body's temperature to stay warm in cold conditions.

Tummo Meditation | Your Inner Fire and the Wim Hof Method. 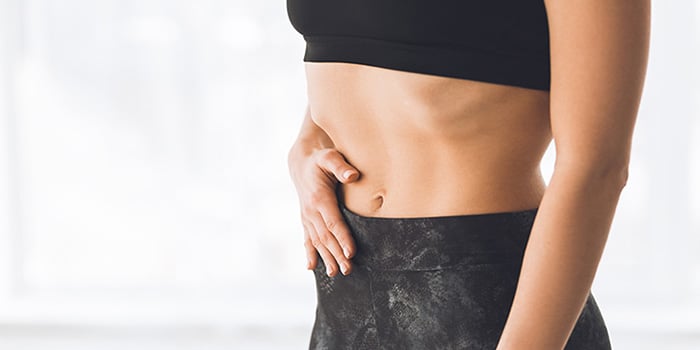 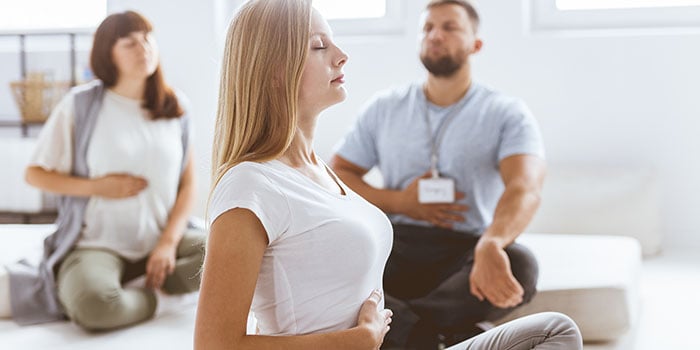